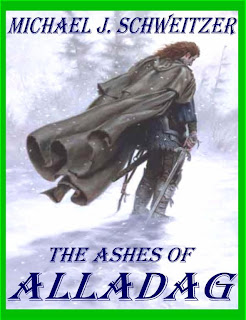 In front of the bay window sat a tall, ornate chair with a high back.  Khazav walked around it.  There, fast asleep in the chair, was Donal, a thin trail of drool draining from his mouth.  The Chitzo looked much as he had when they had parted fifteen years before.  His pale skin was covered in scars, a permanent memento of his nearly being burned alive during the Revolt of the Black Cult.  Long, greasy black hair fell across his shoulders, and a short, unkempt beard adorned his chin.  On his lap sat a short scabbard, occupied by a dagger with a jewelled pommel.
Khazav looked down and spoke softly to his old friend.  When he saw there was no response, he put his left hand on the Chitzo’s shoulder.  “Donal,” he said in a loud voice.  “Wake up!  You have company.”
Donal grunted something incomprehensible and shifted slightly.  His eyes, however, remained tightly closed.  Khazav frowned.  This was not the reception he had been expecting.

Fifteen years have passed since our heroes defeated Lord General Gormann Daggerheart and ended the threat of the Undead Overlord's return to the world.  In the aftermath of the Revolt of the Black Cult, each of the surviving members of the group have gotten on with their lives.  Khazav is now a Lord General in command of his own armies.  Arian has become the leader of the forces of Alladag and serves under the new lord of the domain, Ziza Ze'id.  Donal has established a new Thieves' Guild in Tzuba while Ritchar has continued to develop his ability to manipulate magical energy.   Finally, Oa-neth has returned to the temple where she began her religious studies to resume her training under the Holy Master of the Grinuaolli faith.
But all is not well in the Empire.  A mysterious force seeks to invade and take the continent of Paskanah for itself and is prepared to destroy the entire Empire with untold savagery to do so.  There is also political intrigue as an invidious noble plots to bring civil war to the Empire at that same time.
Our heroes find themselves reunited by events and soon come to realize that their abilities will affect the ongoing war that has erupted around them.  Can they help the Empire defeat the enemies without and within and what will the price of their efforts be this time?