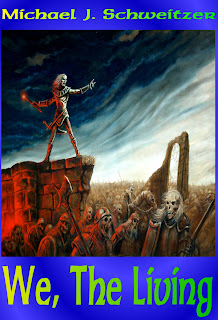 Special bonus!
Click here for the PROLOGUE to the story!  This feature only available to visitors to this website.

Arian frowned.  “I don’t want to go into that mountain,” she said, “to end my days hidden in the bowels of the world like a trapped animal.  If my life is doomed to end, then I choose to finish it in glorious combat.  I have the right.”
“Maybe,” Ritchar said, “but we need you too much.  You would be selfish to exercise that right.”
Another cadre of Qilivs emerged from the trees and began running to the door.  Sam-enn walked over and looked at Ritchar and Arian.
“They are near,” he said.  “All our anticipation will have been for nothing if we do not seal the doors in time.”
“We’re coming,” Ritchar said.
“I’m not!” Arian shouted.  The Chetz-grinuaolli looked over at her.  Perhaps it was the evil aura of the Undead that permeated the air around them, or perhaps he had truly underestimated her grief, but the look on Arian's face reminded him more of an injured animal than the proud warrior he had come to know.
“You must,” he said quietly, hoping a reasonable tone of voice would break through the hostility which encased her.
“Khazav got to die in combat!” she cried.  "I want the same privilege.  I demand it!”
Ritchar sighed.  “Demand all you want.”  He pulled a feather from his belt pouch and raised it to his lips.  “Evel zih lu mi’eyin lo, zih bitech mi’eyif. Rochaf!” he chanted.  The hand holding the feather glowed for an instant and as the light faded, Arian began to rise from the ground.
“What are you doing?” she shrieked.  Her legs kicked wildly in the air as her body began to float towards the opening in the mountain wall.  “You cannot do this!  I’ll kill you for this, do you hear me?  You’d better hide from me, you cursed half-breed.  I’ll pull your heart from your chest!”
Ritchar watched sadly as Arian floated through the door.  Sam-enn looked towards her and then back at him.
“Is she serious?” he asked.
“Oh, probably,” Ritchar replied.  “What did you mean when you said things had been prepared for?”
“Arnodon shall not be taken,” Sam-enn announced, “and the Undead shall regret attacking us.  Come with me.”
As they walked towards the dark door, Ritchar's sensitive ears began to hear the familiar, dreaded sound of hooting and growling.  They’re already at the bottom of the incline, he thought.  In mere moments they’ll be up here.  What do the Qilivs have planned?

Within weeks, an Empire which has ruled the world for over a thousand years is swept away and the Undead, rising unexpectedly from the ashes of the Invasion of the Vozhan Bur, exert their rule over the continent of Paskanah.

As our heroes struggle to survive the onslaught of an enemy they had believed to be destroyed, they flee to Arnodon but not all of them will make the perilous journey.  In order to reach the Qilivish domain, a sacrifice must be made.
And once the survivors reach the safety of the mountain fortress, they must come to terms with what has happened.  All that they have known has been swept away.  Only one person, Oa-neth, can turn the tide of destruction back before darkness and Undeath become too powerful to ever be defeated.
But no one knows where she is!