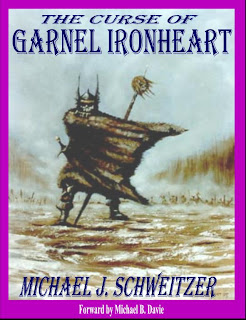 Gormann took a step back and straightened his shoulders.  "All right, the time for introductions in almost through.  I am Lord General Gormann Daggerheart of His Majesty's First Imperial Army.  This is Lieutenant Mosh-agon.  I have travelled a long way to meet you, all the way from Imperius-on-Great-Lake, in fact.  I have a need for your services."
Lord General Gormann Daggerheart assembles Khazav, Ritchar and Don-zee, telling them he needs their help to find two magical artifacts that will help the Empire defeat a powerful revolt.  They proceed to recover the first missing item but are discomforted by who they find guarding it.
"Yes, my sweet," Donal promised.  Arian rolled her eyes.  "And stop that love crap!" she said.
At the same time, a mysterious stranger meets with Arian, Oa-neth and Donal, telling them he wants to retrieve two magical artifacts for him.  They too recover their missing item but not before one of them suffers a personal crisis of faith.
"I cannot escape the conclusion," Ritchar finally said, "that we are still prisoners, just that our cell is much nicer.  Khazav nodded.  "Gormann is a powerful man who enjoys control.  You're right, we're still prisoners and will be until he released us from his service after this second task."
After each group retrieves the first item they have been sent for, they discover the presence of an enemy long thought disappeared from the world.  As the two groups travel separately towards the second goal, they begin to understand that they have been misled.  The purpose of their journey changes radically as they realize they must now destroy an ancient evil that they may have unwittingly unleashed on the world.