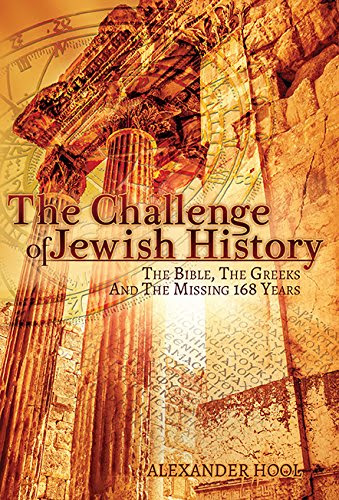 I'm a bit of a history buff so when new books come out on Jewish history that pique my interest I enjoy reading through them.  http://www.amazon.com/Challenge-Jewish-History-Greeks-Missing/dp/1937887316/ref=sr_1_1?ie=UTF8&qid=1434994151&sr=8-1&keywords=challenge+of+jewish+historyThe Challenge of Jewish History by Rav Alexander Hool caught my eye while I was shopping on Amazon for something else so I threw it into my cart.  Having recent finished it I can happily say I was not disappointed.
Rav Hool starts off by pointing that out traditional Jewish history and secular standard history contradict each other on a very important fact: how long did the Second Temple stand for?  According to Seder Olam and various mephorshim it was around for 420 years.  According to accepted secular history it was almost 600 years in standing.  Which is correct?
I began reading the book with a cynical eye.  After all, there is no shortage of books written by well-meaning rabbonim who try to disprove standard history or science in order to "preserve" the truth of a statement in the Talmud or Bible that conflicts with known facts.  (cf. the famous Talmudic mud mouse)  These books inevitably start by claiming that there is an obligation to believe the literal meaning of everything Chazal said, not just in halacha which is obvious, but in science, geography and other secular areas.  Thus if modern science contradicts a Talmudic scientific statement then modern science must be wrong.  All that's left is to present a highly selective assortment of statements by Chazal to prove that they were right.
This book is nothing like that.  Rav Hool starts out by demonstrating all the evidence for the standard secular historical version.  He then points out the inconsistencies or flaws in the historical record that are recognized by archaeologists and historians.  His conclusion is the secular historical version of a 600 year Temple is workable and if it wasn't for our sources saying it was only 420 years he'd have no problem with it.
He then brings in the Jewish view on that history.  His only references to the Bible or Talmudic-era sources are direct quotations from verses and chapters containing numbers of years in various areas.  The assumption, naturally, is that these numbers are correct just as the assumption regarding the secular information was.  This leads him to prove that there is a need to reconcile.
The way he does it is brilliant.  According to secular history the Babylonian Empire was conquered by the Persian and Median empires.  Persia, in turn was conquered in its entirely by Alexander the Great.  Subsequent to his death the empire split into four kingdoms with the Seleucid and Ptoelmaic ones being the most relevant to us since they took turns ruling over Israel.
According to Rav Hool's information there is a fundamental error in the narrative.  Using recent archaeological discoveries he brings convincing evidence that Alexander did not conquer the entire Persian empire, just a big chuck of its northwest.  As a result Persia continued on in parallel to the Greek empire and subsequent kingdoms.  This has the result of contracting history and shaving 200 years neatly off the secular version, bringing it in line with the Jewish accounting.
Again, this is not a book of Chareidi apologetics.  The data Rav Hool brings is from the current archaeological literature, not Jewish speculative sources which allows a greater sense of reliability.
Using this data Rav Hool is able to suggest who Achashveirosh was in Persian history along with other historical events that occurred to our ancestors at that time as well.
I heartily recommend this book for folks with an interest in Jewish history. Despite getting tedious at times (Rav Hool loves his details!) it makes for a very interesting read overall and a new appreciation for events in that far off time.
Posted by Mighty Garnel Ironheart at 01:47

Then by what route did Alexander get to India?

By the north. The southern half of Persia remained intact.

When/how was the royal city of Susa = Shushan looted and destroyed, by this reckoning?

Much later. According to his thesis, Persia was eventually conquered by the subsequent Greek kingdoms. It's just that according to standard history that happened almost overnight while according to him it took a century or two.

About Hool's book: What do you think about Hool's chiddush that Nebonidus was the son of Nebuchadnezzar and father of Belshazzar? And about his pshat about the years of Evil-Merodach?

He's certainly consistent within his parameters, it's just some of those parameters don't have great substantiation. The idea that Evil-Merodach (do you know many years I thought it was a description, not his name?) had two reigns is a bit far fetched, true, but using Tanach as a guide it is plausible. After all, someone had to be running the empire while Nebuchadnezzar was out there running nuts in the woods.
In addition, the Nabonidus identification is a bit of a stretch, sure, but it does explain how to reconcile Sefer Daniel's accounting with conventional history.
The part I was hesitant about was how he switches Persian king names around, claiming that Achashverosh was Cambyses and that one was a "king name". He didn't provide any evidence for that. We know that Pharoah and Avimelech were king names but who says the Persians had that same custom?

Putin's official rule came in two stages, with Medvedev in between. Grover Cleveland's two terms were separated by the term of Benjamin Harrison.

I guess kings didn't have to worry about election rules, but maybe some took a sabbatical now and then.

Nabonidus' background is not clear. He said in his inscriptions that he was of unimportant origins.[2]


He certainly did not belong to the previous ruling dynasty, the Chaldeans, of whom Nebuchadnezzar II was the most famous member. He came to the throne in 556 BC by overthrowing the young king Labashi-Marduk.